This tutorial will let you know how the natural realtime VFX in big games are produced, what advanced skills are needed for a professional visual effect producer, by presenting the power of the particle system of Unreal Engine 4.

The tutorial will offer specific instruction on the methods of producing realtime VFX in natural environments in games, including wind, rain, snow, fire, dust in ruins, haze, etc. The instructor will share with the you his years of experience in techniques and workflow, which he has applied in the visual effect productions in “Uncharted: The Lost Legacy” and many other big games. Moreover, you will learn how to make natural realtime VFX of stylized forests, as well as crushing effect in cinematic shots.

Important reminder: this tutorial is an advanced-level teaching material. To ensure your learning outcome, you should have a good command of basic knowledge of 3ds Max, UE4 and Houdini.

Due to the copyright issue, you should download the model assets used in the tutorial by yourself. The download address is provided in the supporting documents. Do you know the process of scene effects production?

In this tutorial, you will learn the processes of all kinds of game realtime VFX, with the instructor sharing his rich experience in this regard. The advanced game scene effects, such as the crushing effect in cinematic shots, consist of scene setting, element adding, a strong particle realtime VFX system, material making, map replacement, etc., all of which will be specifically explained in the tutorial, helping you master the complex processes of realtime VFX productions.

This tutorial will begin with an in-depth explanation of the UE4 particle system and other tools that will be used in the tutorial, followed by the instructor’s practical demonstration of advanced realtime VFX for natural environments. The techniques mentioned in the tutorial can be applied to the realtime VFX production in any other styles. After learning this tutorial, you will understand how to produce all kinds of realtime VFX from scratch, and be prepared to be a professional in this field.

This section will offer an in-depth realistic case analysis of rain forest effect, including advanced techniques in lighting and rendering. The particle system will be used to produce the raindrops effect, by selecting the texture and adjusting the size, angle and splashing effect of raindrops. It takes accurate parameter adjustment of all kinds of tools and orders to eventually produce an advanced realistic game scene.

Overall improvement of technique and efficiency

The realistic game scene of ruins, one of the five cases, will allow you to understand the process of a 3A game scene, covering scene attachments of ruins, element adding, weeds, flies, raindrops, dust, etc. You will learn how to produce water drops effect and collision effect of water drops, and make dust in the particle system.

| Through this course What will you gain? | 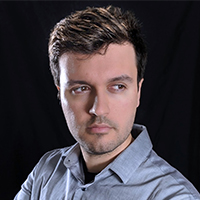 Fabio M. Silva is now a senior visual effect producer in Blizzard. With more than a decade of relevant experience, he has previously worked in Guerrilla Game Studio, Crytek, Epic Games and Naughty Dog, and participated in the production of a number of big games, such as the “Killzone” series, “Ryse: Son of Rome”, “Paragon”, the “Uncharted” series and “The Last of Us”. Being a three-time nominee, He has won the Visual Effects Society Award, USA for his real-time visual effects production for a game.

For more tutorials, visit  www.yiihuu.com
80 Lessons（Finish） Uploaded on 2020-01-06
we will constantly update the project files